Transform how you manage money with the most secure and trusted cashless solution for schools in the UK. Whether you’re a primary or secondary school, MAT or local authority, you can collect and manage payments for meals, clubs, trips, uniform and more – all from one place. 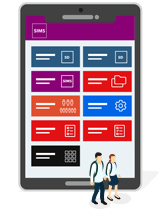 Providing schools with the tools they always needed but never had. SIMS makes school life more efficient and easy to manage for teachers, senior leaders and office staff. Once implemented, SIMS enables schools to quickly and efficiently manage school life and drive improvement. School dinners made easy. Empower students to eat well while improving the safety, efficiency, and productivity of your school’s kitchen. With our fully paperless catering opton, caters and local authorities can manage multiple kitchens at the touch of a button.

At Schoolcomms, we know that when it comes to a child’s education, parents matter

Parental engagement has a very positive impact on a child’s learning.

We want to help schools engage parents more closely by developing a two-way relationship with the home, improving learning outcomes for each and every student. We know that technology alone can’t do this, but using it to enhance the relationship between school, parents, and students is the key.

How did we get here?

It all started in 2003 when we saw a missing link between messaging systems and the schools MIS. We brought together a small team of people and developed Schoolcomms to fully integrate with SIMS. It began with Messaging, and gradually we developed more features.

By 2008, we had added Import from SIMS, writing back to SIMS and Attendance features. After having our first sale in 2004, we started to grow, steadily at first, then more quickly after 2008, once the product had developed. By this time our small team had expanded, and in 2009, we moved into an office in Bude, Cornwall.

2010 brought a very snowy winter, which saw many schools realise the real benefit of having an efficient communication system to send important messages to parents in bulk, and so Schoolcomms continued to flourish…

Back to the present – we now provide a sophisticated parent app integrating our features for messaging, reporting, club management, cashless payments, and much more so that parents can engage from any place at any time. Our all-in-one parental engagement solution is now trusted by over 3,000 schools across the UK. In January 2017, Schoolcomms was acquired by ParentPay Group, the merger bringing together two leading lights in the provision of web and mobile delivered payment and engagement services for schools and parents.

Schoolcomms provides the easiest and most efficient way for schools to improve parental engagement. We work with you to continually develop and improve our products, ensuring you have all the tools you need to continue raising standards. You can rest assured our dedicated support team is on hand to assist with any queries or issues, whether you’re new to Schoolcomms or a long-standing customer.

Our all in one solution is designed to help you engage parents in a cost effective and easy way.

Each of our products works together. Whether it’s messaging, club management, or payment services, they all build on the parent app, enriching its capabilities.

Our friendly Support team is committed to helping you succeed. Whether you’re looking for specialist advice, e-learning resources, or general guidance, our Support team has got you covered.

Want to find out more?

Whether you’re looking for advice on improving your parent communication, interested in asking any questions about Schoolcomms, or want to book a demo, we’d love to hear from you. If you’d like to meet us in person, we can come to you. Simply ask us for an in-person appointment, and we can show you how it all works.

Saving time in schools and making life easier for parents.

More Info
© ParentPay Group 2023. All Rights Reserved.
Made with by HeadRed.net